Our planet’s oceans are invaluable. They shelter precious ecosystems, cool the planet, and are beautiful to look at. Thier waters also hold largely untapped power reserves. Energy in the powerful tides and movement of the water is tricky to harness, as man-made machines struggle to withstand the power of weather and water. However, Japanese company IHI Corporation has been developing underwater turbine technology for years; and in 2017, they partnered with New Energy and Industrial Technology Development Organization (NEDO) to test an ingenious turbine named Kairyu.

Kairyu roughly translates to “ocean current” in Japanese. The machine is made of three connected 66-foot-long cylinders of power generators with attached turbine blades like those on windmills. Made of pressure-resistant steel, the machine has to withstand rough waters. It is designed to float, tethered, about 164 feet below the surface. As the surface currents churn the blades, they rotate in opposite directions, thereby stabilizing the tethered turbine. It can maneuver itself, too, to catch the strongest current.

The current created by the swirling waters of the North Pacific gyre are channeled into the strong Kuroshio current near the coast of Japan. As an island nation with mountains, Japan has coastal waters in abundance, but less space to put solar panels and windmills on land. After a three-and-a-half year test run in the ocean, Kairyu can produce 100 kilowatts of power. This is significantly lower than the average offshore wind turbine’s 3.6 megawatts. However, researchers think they could create a larger model which produces 2 megawatts.

The Kuroshio current could produce about 205 gigawatts of energy, potentially outstripping Japan’s present energy production. Eventually, farms of ocean turbines may soon lurk beneath the surface of our oceans. As science catches up to the challenges of building resistant technology, harnessing the power of ocean waves may become a critical source of renewable, nearly endless energy. Substituting clean energy for dirty fossil fuels is critical to the planet’s future, and the oceans are part of this mission in numerous ways.

An enormous sunken turbine off the coast of Japan is generating power using the renewable forces of the tides. 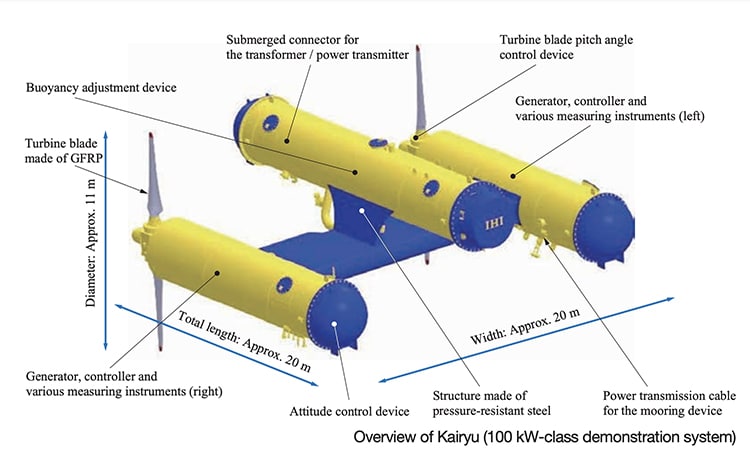 While the machine, named Kairyu, only produces energy on a small scale at present, it may be an ingenious and inexhaustible source of clean energy in the future. 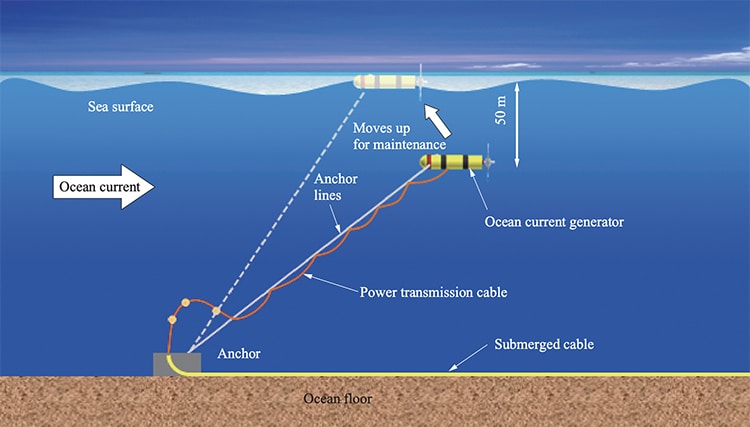 Conceptual diagram of a floating ocean turbine in a current. (Photo: IHI Corporation)