Sam Brabham has turned his first laps in a Supercar today as part of a Triple Eight Race Engineering evaluation program at Queensland Raceway.

Son of David Brabham, 27-year-old Sam got behind the wheel of Cameron Hill’s Dunlop Super2 Series Holden VF Commodore at the Ipswich circuit.

Having largely been out of a race seat for three years, Brabham was stoked with his first taste of Supercars machinery.

“It was a lot of fun,” he told Speedcafe.com after his first lapse.

“I’d like to just keep building myself; I know I’m not going to be fastest on the first lap but I want to take it step-by-step and really understand that I’m doing the right thing.

“I’ve still got a couple more laps to do this afternoon which will be a time to have a proper go at it. 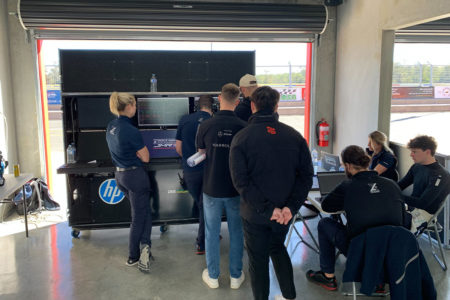 “I’m happy with how the first run went. The car is amazing, it had a lot more grip than I expected; I think there’s a common misconception that the cars are trying to kill you but it’s not, it’s actually very compliant.

“It was a really cool experience actually as my first proper try at it.”

The British-born driver says the opportunity came about through a “surprise” phone call from the team.

Brabham is this year competing in Fanatec GT World Challenge Australia Powered by AWS in a Mercedes-AMG GT4 under the Harrolds Racing banner.

Triple Eight supports the team, sparking the relationship with Brabham.

“I knew the day was happening and I spoke to the team and they asked me ‘do you want to come and drive a Supercar?’,” he explained.

“Especially with Triple Eight as well, it’s not just with anyone it’s with, in my eyes, the best team in the country.

“They’re running our GT4 car, which has been great; the relationship started there but I’ve got to do the [best] job I can do and if it leads to something then great.”

In preparation for the day Brabham bounced ideas off his father David, who is one of four Australians to win the 24 Hours of Le Mans and drove in Formula 1.

“I had a chat to my dad a couple of nights ago (to prepare),” Sam said.

“Sometimes you watch a video and you’re watching someone who has done it a lot, and you have got to figure out your own way of doing it.

“Everyone has differences in the way they achieve their speed.

“From my runs this morning I wanted to make sure my technique and application was correct… all of that was better than I thought it was going to be so I was really happy.”

The third-generation racer previously raced in Porsche Carrera Cup Great Britain in 2018 and 2019, before moving to Australia to explore opportunities.