The four-time AFL premiership player stepped out for Devon Meadows in the MPNFL in a match against Seaford, more than two years after calling time on his career at the elite level.

All was going well on Saturday afternoon until an incident in the third quarter forced Hodge into emergency at Epworth Hospital.

The former Hawk and Lion ended up with a badly broken finger, cutting short his return to footy in the eventual loss, while attracting a few sledges just to rub further salt into the wound.

“It didn’t go to plan,” Hodge said on SEN’s Whateley.

“I went out and played for Devon Meadows against Seaford. In the third quarter I got a high free kick and as I’ve looked down at my hand I thought ‘that doesn’t feel right’ and there was a little bit of bone sticking out of the finger.

“I ended up having a compound dislocated finger.

“I had to leave there at three-quarter time. I did get a few comments over the fence of ‘get a bucket of cement and harden up’, and someone heckled me and said, ‘oh no, he won’t be able to hold his microphone anymore’.

“I went down and had seven hours in emergency at Epworth in Richmond, had an operation and got home about 12:30 that night.

“So it was a fun Saturday, but I still had a ball.

“I went out and trained with them the Thursday before. It took me back to my Colac days. Old school country football. A lot of people turned up, apologies to everyone who got there and I wasn’t able to fulfill the whole game.

“It seemed like a really good day out there. Unfortunately the team lost and I spent a few hours in hospital.”

Hodge had his fair share of injuries throughout his AFL career so returning home crocked wasn’t anything new.

As a result, his popularity with wife Lauren hadn’t taken a hit.

“I had to delay the flight. We were planning on going back Saturday night at nine o’clock. I had to grab (an) 11 o’clock (flight) on Sunday,” he added.

“So getting back the next day wasn’t ideal, but ‘Loz’ understands what football is like and she knows I’ve had a few injuries over the journey.

“She looked at me, laughed, and her first call was, ‘Well, at least we don’t have a newborn to change nappies’.

“Last time I had operations on my hand was when our second son Chase was two weeks old and I got out of changing nappies for the first three months of his life.

“She understood it was all a part of the game and she knows I do silly things like this.” 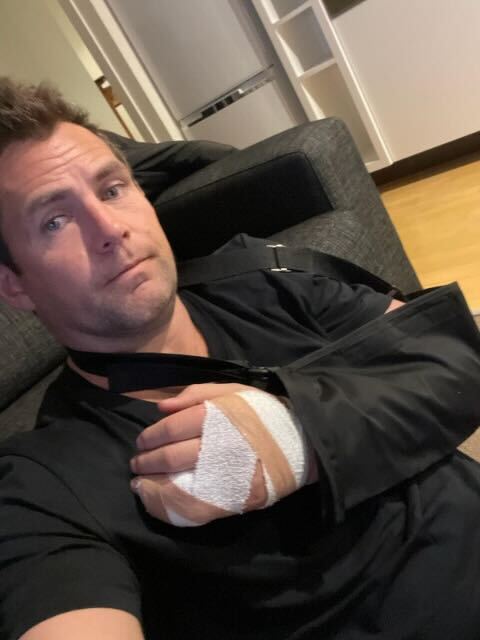 The 38-year-old also picked up a little calf niggle after undergoing what he describes as a more involved warm-up than he has ever experienced.

“They did a longer warm-up than what I did in 18 years of AFL football,” he continued.

“We went out for a kick at three-quarter time of the reserves and I thought that’s ok. Then halfway through the last quarter of the reserves we went out to the back paddock and I reckon would have done about five ks in that warm-up, just back and forth, jumps, hops, skips.

“As I’ve ran out I’ve felt a little something in the calf, so I spent the first five minutes of the warm-up out on the ground getting Deep Heat and a thumb through the calf.

“It’s pulled up ok, a little bit sore after the game but nothing too bad. The finger was the biggest issue out of the day.

“You live and learn and hopefully in four to six weeks I can get back playing golf again.”

Despite the injury, Hodge says he would “100 per cent” pull on the boots again one day in the future.

Image of Hodge in action from Devon Meadows FNCFacebook.